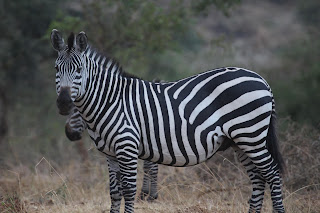 During your wildlife tour Uganda, you might be overwhelmed with the numerous species of wildlife that you will see during your wildlife safari in Uganda in the different National parks depending on your Uganda tour itinerary. However, nothing stands out as significantly as the black and white striped zebra in Kidepo Valley National Park Uganda.

Situated in the far North-eastern corner of Uganda, along the Kenya and South Sudan border, Kidepo Valley National Park is a haven to numerous exceptional Wildlife species including the fine-looking Burchell’s Zebras. Africa has a diversity of species of zebras but Uganda only habits Burchell’s Zebras and can only be found in two National Parks in Uganda; Kidepo National Park & Lake Mburo National Park Uganda. If you want to encounter zebras on your Uganda wildlife tour, or on your family wildlife safari in Uganda, you ought to make a Uganda safari tour itinerary that takes you for Uganda wildlife tours in any of the mentioned national parks.

The fact that these animals are found in only two places in Uganda, Kidepo Valley National Park is your perfect choice for your tour in Uganda for the reason that there are unique wildlife species that you will encounter at this destination during your safari to Uganda. These include the hunting dogs, bat-eared fox, Wild dogs, striped Hyenas, Caracal, the cheetahs, Pangolins, Aardwolf, and birds such as the Ostriches among others Uganda wildlife safaris species.

What is the origin of the Burchell Zebras?

Burchell’s Zebras belong to the horse family. They are called so because they were named after a British explorer and natural scientist William John Burchell. Their stripes are broader with a bright white colour that captures everyone’s eyes hence tempting you to take a picture of them. A female zebra is called a mare and the male is a stallion. Each zebra has a unique, different pattern of stripes. Zebras sleep standing up like horses.

How do they live?

Burchell zebras are social animals that live in a small to large herd known as a Harem led by a stallion while the rest follow. The females that live in the group are called fillies. A female zebra can have her first foal (colt or baby) by the age of three and can give birth to a foal every twelve months. Zebra foals are brown in colour when they are born and are very close to their mothers, but the male foal is also close to its father. The foals leave the group anytime from the time they reach 1-year-old. 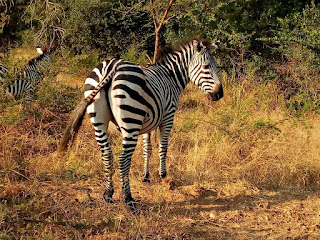 Zebras walk, trot, canter and gallop like horses, but have a low speed. Unlike the horses, zebras have not been domesticated and run wild. Zebras are a short, stocky animal that is generally about 8 feet long and stands between 4 and 5 feet at the shoulder. An adult zebra can weigh up to 650 pounds.

Their eyes are well placed on the side of their heads giving them excellent eyesight. Because zebras live in the wild, this good eyesight helps them escape predators. They also have night vision that helps them to see in the dark. Zebras also have great hearing and an excellent sense of taste and smell.

Zebras are herbivores, meaning they feed on plants, grasses and roots. This makes them a very successful member of the grassland community.

How do Zebras communicate?

Everyone wonders why do Zebras have stripes? No one knows for sure, however, it is believed that the stripes confuse predators and keep them free from insects.  The Zebra stripes are much like human fingerprints. Just like our fingerprints, Zebra’s stripes and pattern are unique to them individually.

Another thought among scientists has been that zebras have stripes because it is the manner in which they recognize each other.

Interested in seeing zebras? Safari in Uganda or book a family safari to Uganda to Kidepo Valley National Park or Lake Mburo National Park for an interesting Uganda safari tour game drives in the magnificent wild environments. Book your Uganda tours or Uganda trips with us by booking one of these packages;